To survive, any being in nature needs to feed. All beings do feed. From minerals to divinities, all feed. We human feed of solid materials, water and air. hamburgers, big mac, Mag and cheese, vegetables, what have you. That’s what food is for us. But there are other kinds of food as well.

In some traditions, it’s common to offer material food to “spirits”. In the old traditions around the world, material food was offered to the gods as a sacrifice or as a sign of worship they say. Our ancestors knew the real reason of the offering of flowers and animals. Today’s people have lost the core reasons of such offering. That’s because those old practices were carried over so many generations that they are now practiced mechanically and usually wrongly as rituals.

It is dangerous to do things we don’t know much about. People who offer any kind of food to so called “spirits” do not always know what exactly they are offering the food to. Many of them believe that the “spirits” somehow magically eat the actual food they give them.

How many among us have even questioned: why so many flowers at the cemetery and in the church? Do the dead or the “spirits” AKA "the entities" eat the flowers? Obviously not. In reality, the entities are not after the food which we human offer them. They are after the emanation of that food (Not any food of course). In the case of flowers, it is the odors they are after. I’m not a clairvoyant, but I can tell this. Gardens are very much visited by many entities and many of them are there because of the amount of great smell of some flowers perfume.

So it is good to keep in mind that it’s not the actual flowers we are offering to the “spirits”, it is the smell (the etheric emanation) of it. Some evil spirits can also be attracted to bad smells, just like many good spirits of nature are attracted to good smells. You will therefore understand the good use of incense during rituals, or religious mass. 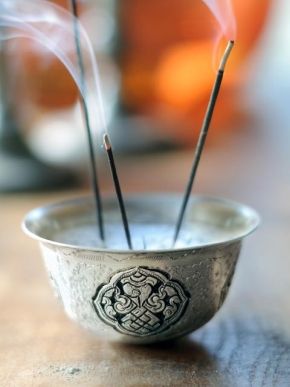 A human being alone can be a prey of all kinds of entities. The human body can emanate a high quality good smell or a high quality bad smell ( higher quality bad smell, if that's even a good expression hahaha). Humans have a special discrete smell in all over their body fluids ( sweats, saliva, seminal liquid, blood…), youngsters and pure souls have that mystic strong yet discrete perfume with them. A discrete perfume which entities of the astral world can easily notice and even feed from. In the past, to try and attract entities, there were rituals to sacrifice virgin women/men or children to the gods. Their rituals did work, but at what cost? It never ended well for those who did such horrible practices.

Sacrifice does involve killing in way, it may involve offering food to the entity. But it must be done according to the spiritual laws of life, else we simply add bad karma on our shoulders. In some instances, the good incense of flowers or plants or even of a human can be enough to keep the evil entities away from us. Cutting flowers from their branches or killing of plants is an okay act. Plants arrived first on earth for they were to serve the coming beings (animals and humans). Plants have offered themselves as first natural food for all organic beings on earth. Killing them doesn’t hurt them in any way because unlike animals and humans, plants do not have very developed emotions to be able to feel the pain. Most of them only have a basic sensibility.

People want stuff from entities, fine! Life on earth can be tough, we can all agree on. We need some help from time to time, even the help of the invisible. Fine. But it would have been great to do it with a little bit of wisdom. Wisdom requires we know what to offer to spirits and what entities to invite. With a bit of wisdom we understand that the offering of humans or animals as sacrifice is an offering made to lower entities of the astral world. With a bit of wisdom we understand that as human beings we can emanate a mystical good perfume, the wonderful colors in our aura, and the most beautiful sounds during our meditations to attract the good and higher entities to us. With wisdom we know that music or sound is food for higher entities. Thoughts are food for entities of the mental world. And then silence is one special sound at the breakfast table of higher spirits, of divinities. Then what would you prefer to feed? or what would you wisely choose to sacrifice?